This weekend I made progress on my pattern for the yarn co, worked on my ripple, watched the Super Bowl, and made this new hat for Ireland. I get lots and lots of messages about the owl hat, so I wanted to add details about this one with lots of photos.

I've made several of these hats, but none for Ireland. So I decided to make one for her with the leftover scraps from previous hats. It actually started as a piggy hat, but morphed into an owl because I ran out of pink. It's not a piggy, but she still likes it. She has a piggy hat on the brain so I think I'm still going to have to make one of those too.

I changed a few details for this hat. The original is here.

For this one, I obviously made it larger.

I added the eyebrows later after the eyes were sewn onto the hat. I worked a sc around 16 sts. Refer to the photos. 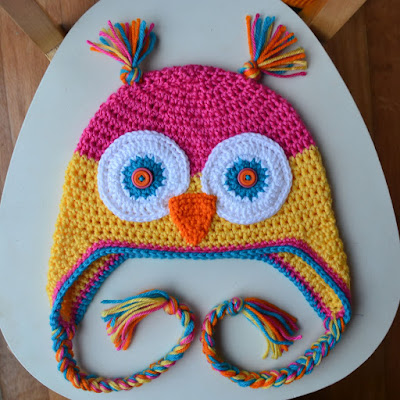 I also changed the edging. I wanted 2 colors for the edge and a more finished look. Recently, I've gotten a couple of comments asking me how to make projects look more neat and finished. Basically, for edgings, I always add a round in the same color before changing to the contrast color. If you change to the contrast color for edges (like the sides of the earflaps) then the edges will not be as neat as possible.

Then for this hat I added an extra round of edging with the blue. I worked into the back loop to make the pink/ blue combo look even neater (is that a word?) 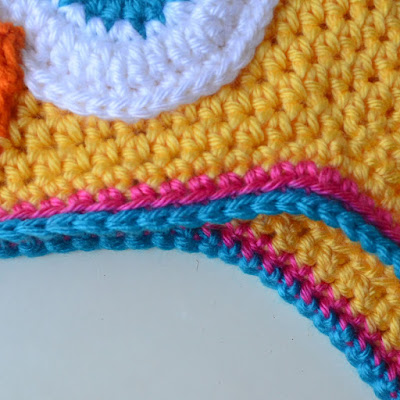 Also, to make the face look neat, try to take lots of time to center the eyes and nose. When sewing, only work under the first layer of the stitch on the hat so the back side will be tidy. You won't have a mess on the inside of the project. And if I'm not happy about the face, I'll redo it until it looks like I want it to. 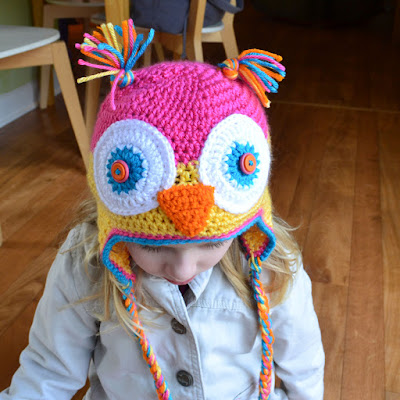 
It's a new month so that means giveaway! I'll be back in a couple of days with the details.
Posted by Liz at 9:21:00 AM