Slow Progress and a Box of Goodies 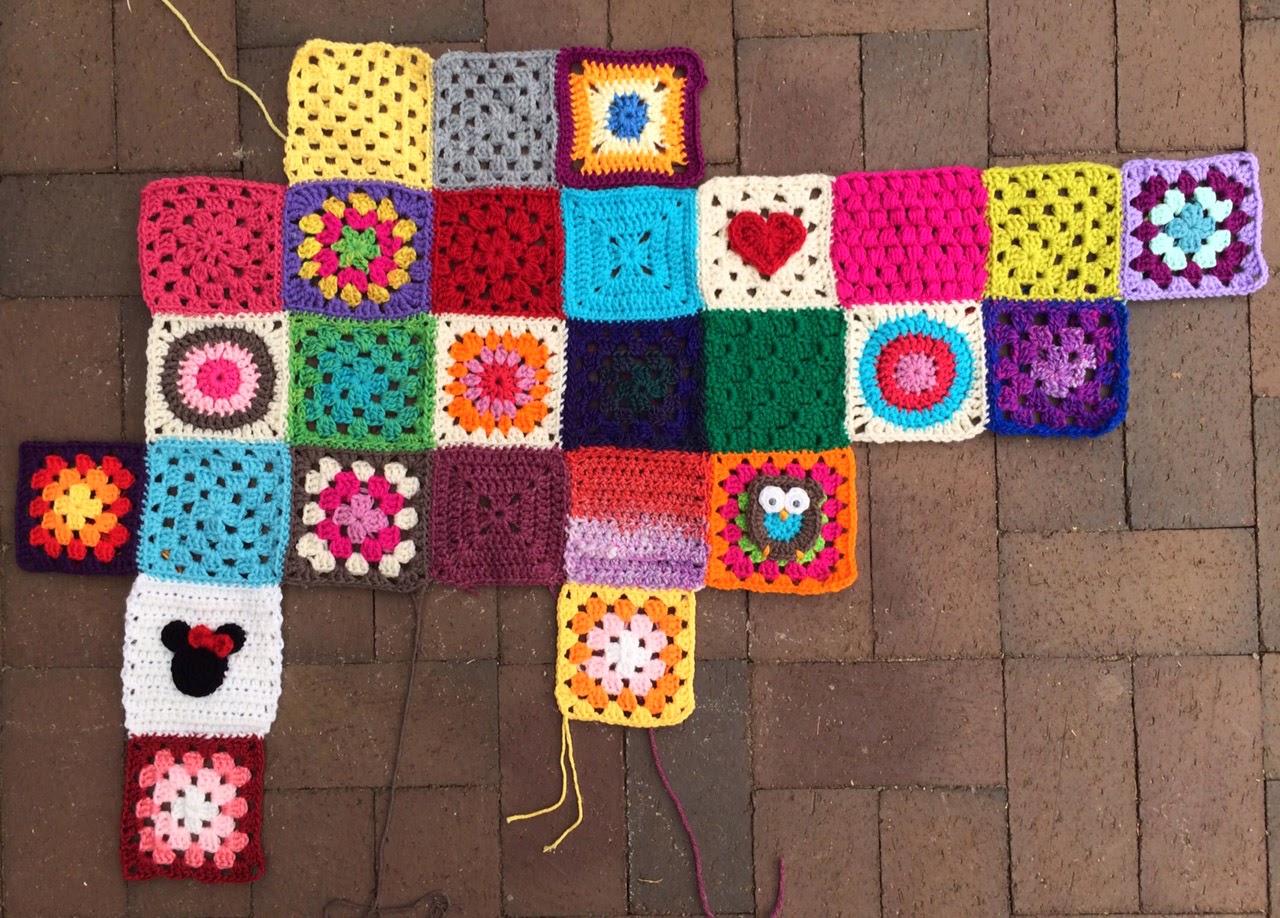 I'm trying to be creative with the squares, which is making this a slower project than I would like. Who am I kidding? Even if every square were the same, it would be a slow project for me.
I decided to add a couple of Minnie Mouse squares. We have Disney on the brain (planning a trip later this year) 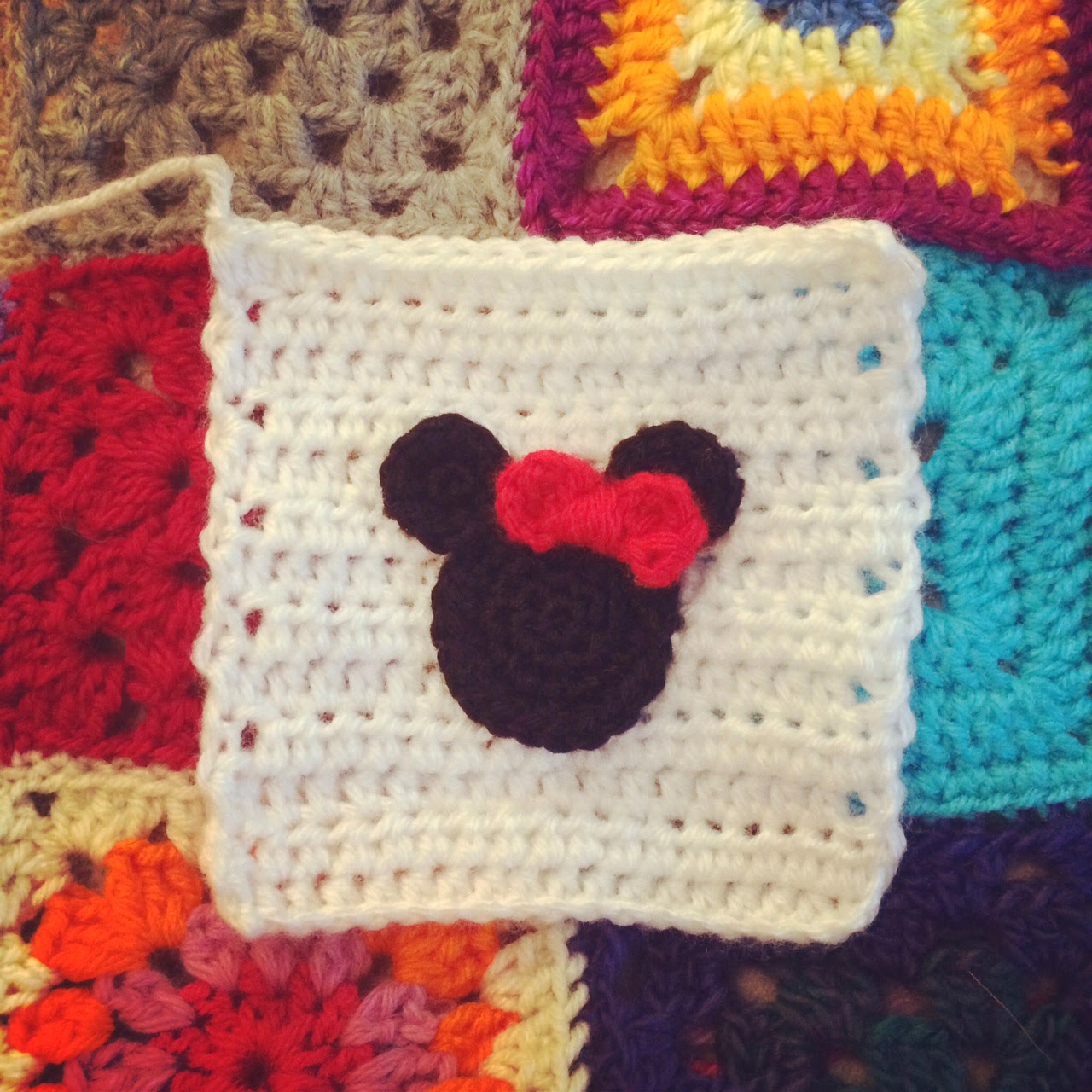 I'm making this a little differently than other crochet mood projects. I notice some are making their squares according to their mood for the particular day or week, and then placing them in order as they go. I'm doing the same in a way. I'm placing them where ever I feel like they look best. So is this truly a crochet mood blanket? I don't know.

The sock knitting is going pretty well. I'm now at the toe of the first. Hopefully, I'll still be motivated to finish the second.
Don't judge, remember, it's my first

Earlier this week I received a package from a Ravelry swap that I participated in. 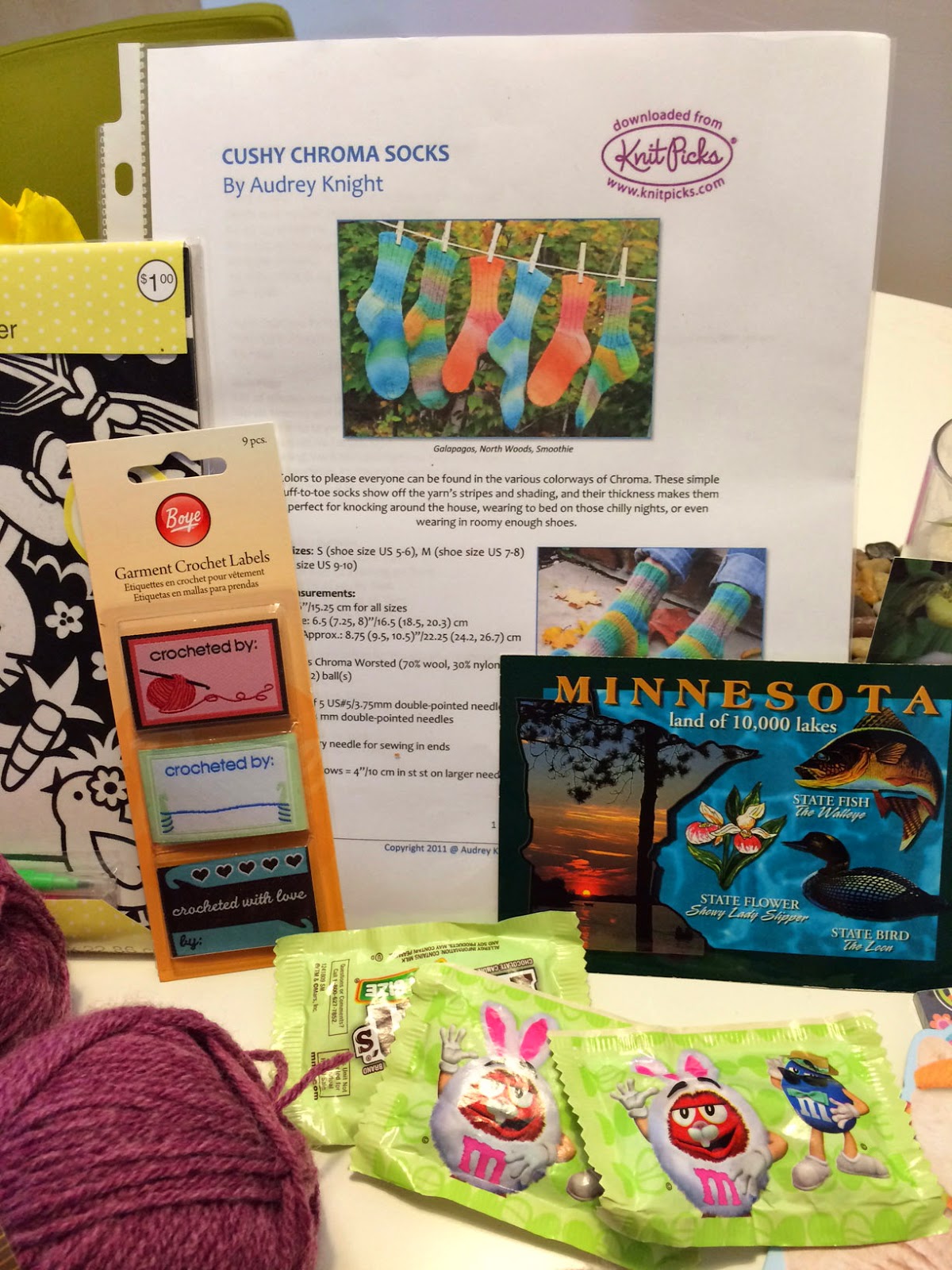 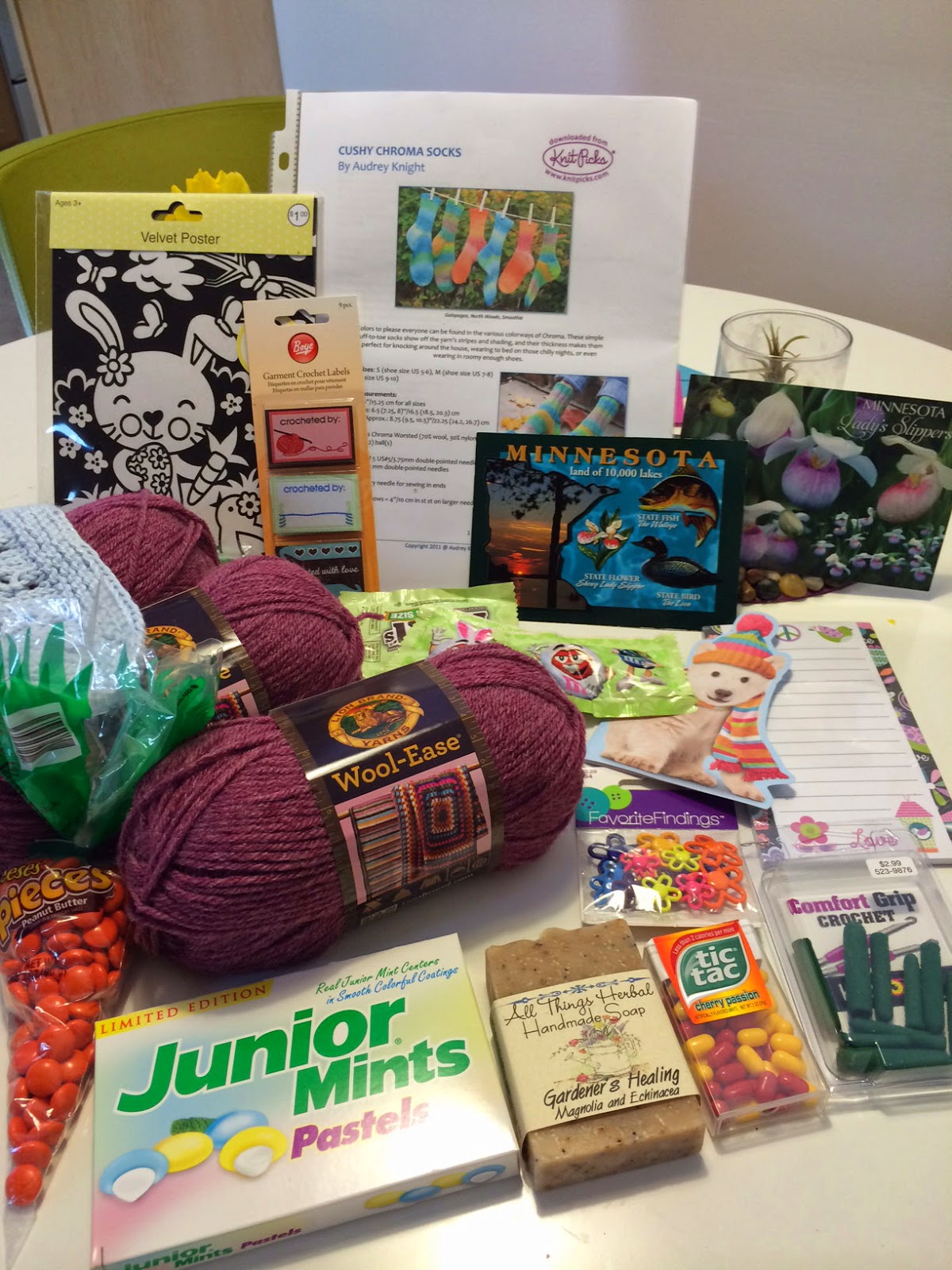 I love it. I racked up, 3 skeins of Wool-ease, crochet hook grips, candy, handmade soap, buttons, a sock pattern, notepad, postcards from Minnesota, a knitted dishcloth...even something for Ireland. Fellow knitters/crocheters are the best aren't they?

I've become obsessed with socks. I've always been intimidated by the thought of knitting them. But Instagram has motivated me to try 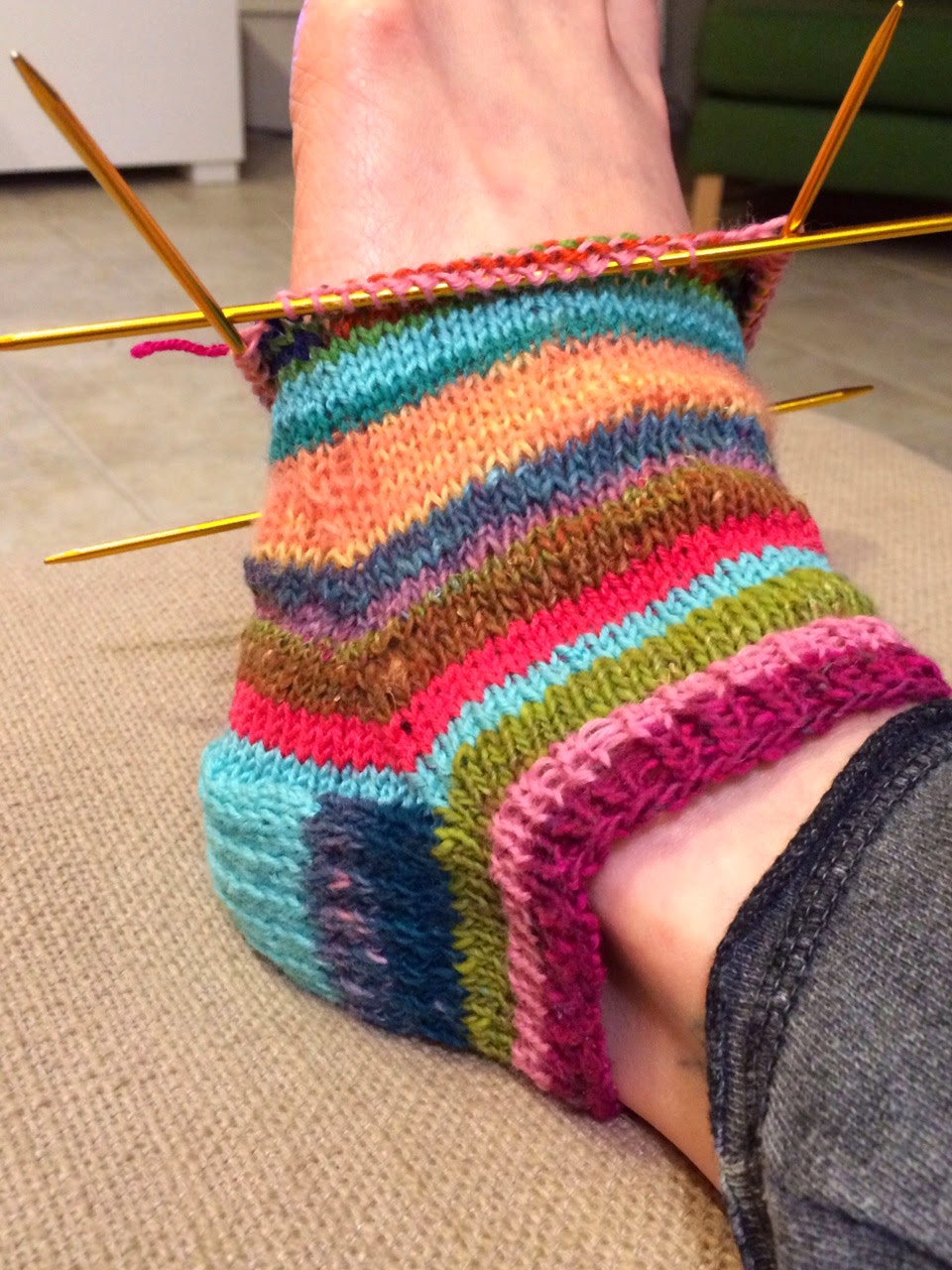 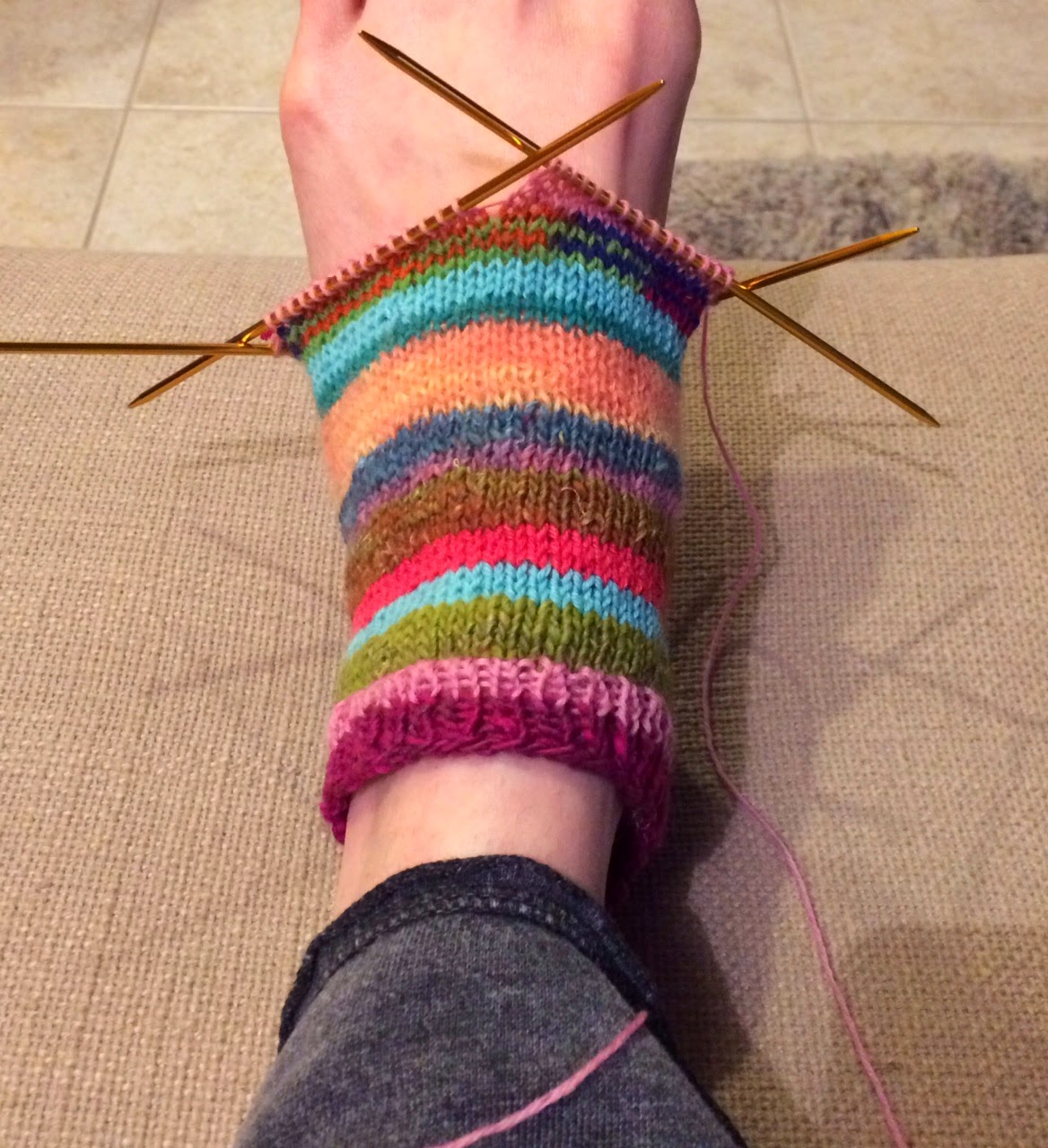 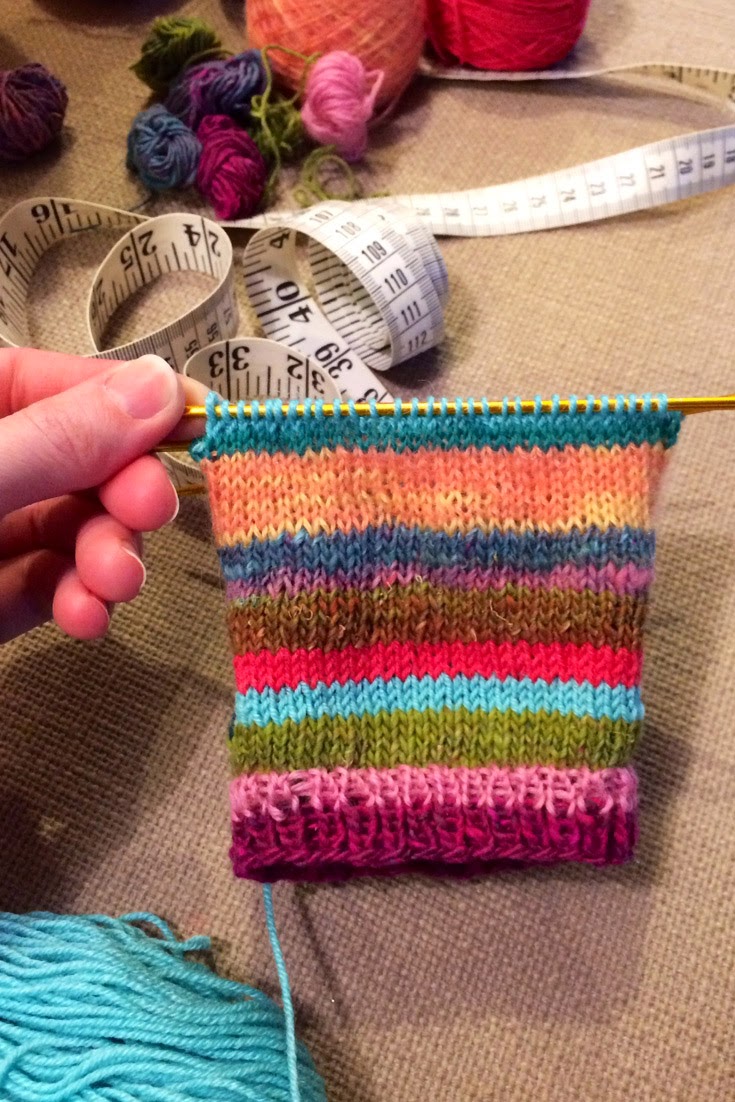 I have lots of sock yarn scraps left over from crocheting shawls. So for these I'm using Noro, Spud and Chloe, Universal, Wisdom, and a couple unknowns.

They're not perfect. This first one is a little big. My stitches are sloppy. My feet and ankles are slim, so the fit is a little loose. Hopefully they'll be pretty and colorful even if they may not be a perfect fit. I've learned that socks are way easier than I thought they would be. 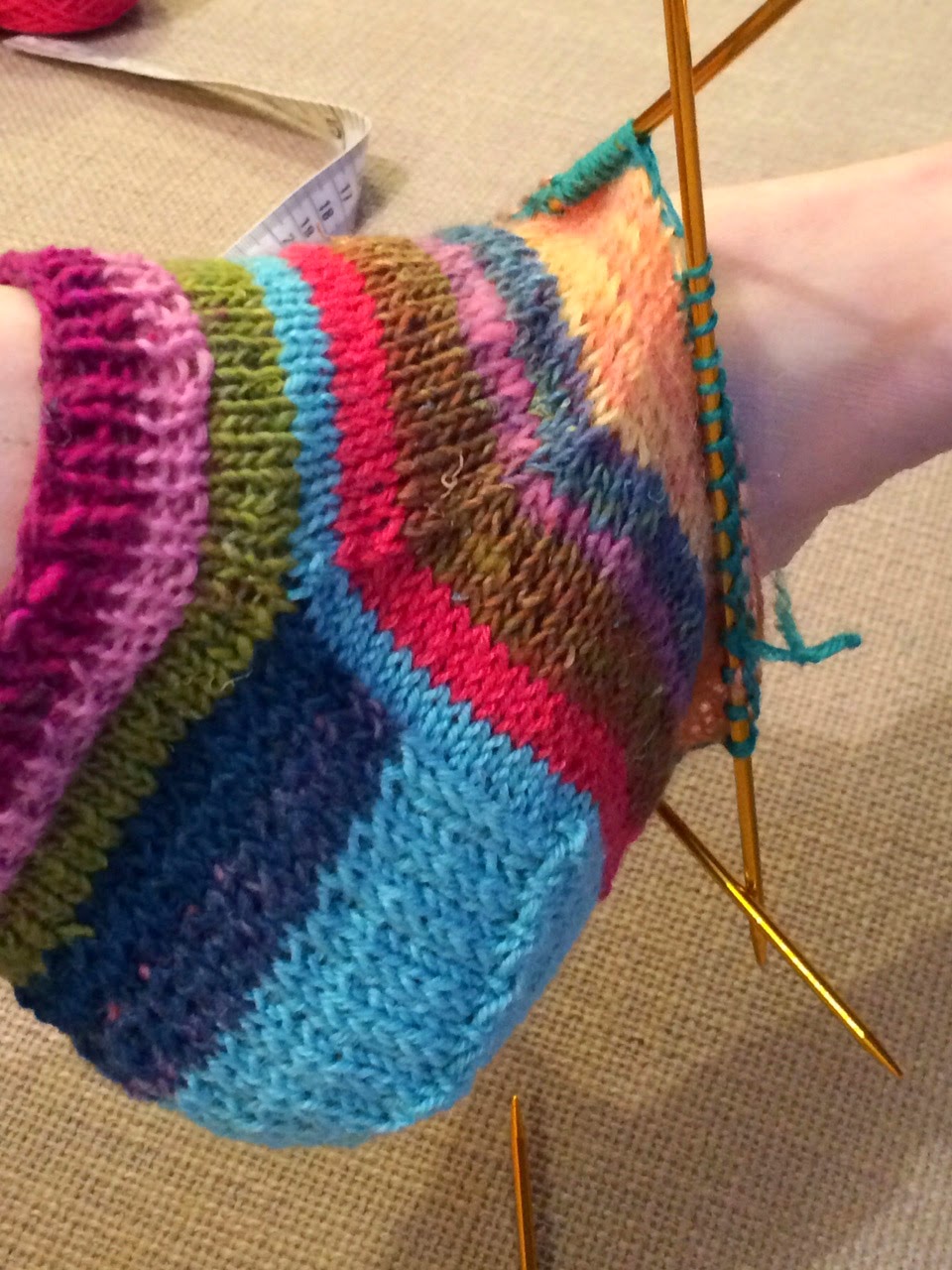 dpns are a breeze for me...why are circulars so hard? Anyway, I hope I won't lose steam after the first. I'm reading that socks are addictive so I'll try to make my second pair look and fit better. I'm looking for some colorful sock yarn for the next pair. Any recommendations would be nice.

Ireland's blanket is coming along, but of course I've lost interest. I'll force myself to keep crocheting a couple squares every other day or two.

The pattern for these are from Purl Bee, the Sporty Striped Peds.

I don't know why I'm so obsessed with knitting lately, but I'll post a pic of Ireland's blanket in a day or two.

Have a great weekend!